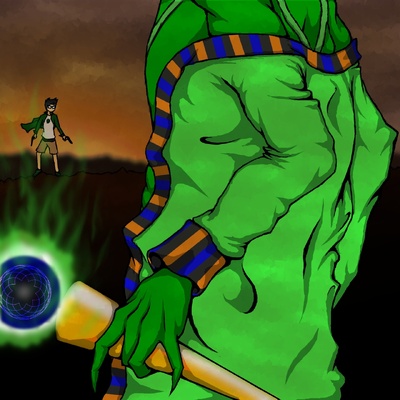 I began "Finale Strife" as a long, slow-burning build-up song for the final battle with Lord English, in a similar vein to "Finale Toccata" from Castlevania: Symphony of the Night. That, however, didn't pan out, and it ended up turning into a fast-paced, high-energy strife theme more in the vein of "The Curse of Sorrow" from Castlevania: Order of Ecclesia (the only Castlevania game I've actually come close to beating), especially the organ, electric guitar, and snappy drum kit. The main melody has some resemblance to the Black King's theme from Rex Duodecim Angelus by Malcolm Brown, but not enough to qualify as a remix or arrangement.

I initially had no idea what I was going to do for this song. I skimmed through the tracks and noticed this one by Willow Ascenzo (who did some of my favorites on coloUrs and mayhem: Universe A like Teal Hunter and Violet Mariner), and I was instantly sold probably because of my love for pipe organs. Anyway, for a lack of better inspiration, I used the description left on soundcloud - "Final battle with Lord English." Tie that to Aranea's mentioning that Jake was destined to beat Lord English, and I had my inspiration. The lineart took much longer than it should have since my tablet had been freaking out and I haven't gotten the new one yet, but the coloring went quite smoothly.