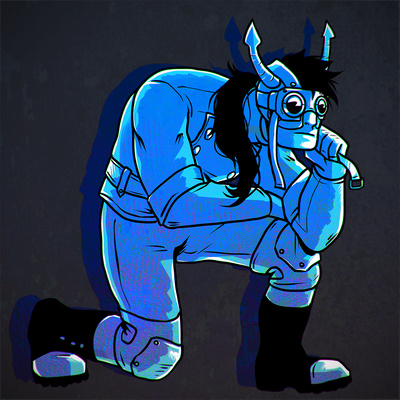 I liked the strong man character type and wanted to take a simple piece of music and build strength. Also, robot guitar noises.

I wanted to capture both a sense of melancholy and also one of power and solidity so I went for something that resembles a Modernist statue or a piece of Communist Propaganda, but with a sad, thoughtful pose. The talky guitars gave the track a retro feel, which I also tried to work in with a bit of grunge too. It's kind of an uncharacteristically cool looking portrait of Horuss to match a track that has an understated strength and dtermination, creating a sense of tragedy since none of the Zahhaks seem to ever live up to the promise of their strength.