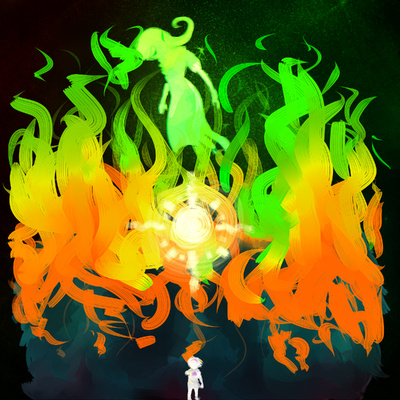 This track was initially just an arramngement of Heart of the Forest by Solatrus, from the Spiritwake soundtrack. Then I was all "hey I bet Flare would sound pretty good with this" so I added it in and it didn't sound terrible. A fadeout is a totally lazy way to end a song. Apologies to Jeremy Iamurri and Clark Powell.

Thanks also to sayachan for the exceptional track art.

This song takes me back to when Rose was trying to escape her impending doom and get into the game and then when hearing Flare I find myself thinking about the tumor, its countdown, her death and ascension and it makes me realize how much she has grown. So, what I tried to imply with this cover is how that fire she was trying to evade eventually became the flames of the green sun where she accepted her fate and arose anew.