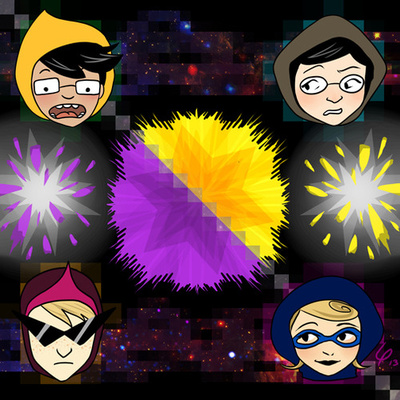 I wrote this song as an art exchange for redux on the forums who wanted more sunsetter remixes.

When I first saw the track's name on its own I thought of Caliborn's planet quest, but I thought this song was too upbeat for that, so I went with a Derse and Prospit's moons exploding and the Alphas reaching godtier. I really enjoyed drawing Jake and Jane's face. Drawing Derse and Prospit was quite the challenge but I hope I managed something recognizable! I tried to include some pixely elements and most of the godtier update (unfortunately I couldn't find a place for Jake's crotch but hey we all know why he's so shocked).