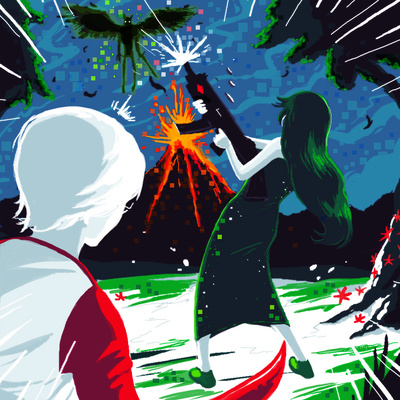 So, this was one of my first chiptunes. People seem to like it. However, when I listen to it now, two years later, I realize how little I knew about Famitracker, and music composition in genearl. I like to think I've learned a great deal since Ohgodboss. Still, I guess it's catchy enough as it is. Enjoy!

oh for the love of god!

I actually did two pieces of potential art for this, both featuring Dave and Jade fighting Bec Noir, since it seemed appropriate for an intense boss tune featuring a theme associated with Jade. There was a duller version of this as well as a more comic bookish one. A panel of friends agreed that this one read better, but it was a little flat, so I started brightening it and tweaking it, but still wanted to convey '8-bit', so I started playing around with a square brush throwing in this Darwina-esque square noise, which I thought looked pretty cool. It has been remarked that Jade firing an assault rifle in the air in front of a volcano is metal as shit. That's probably my favourite commentary on this image.