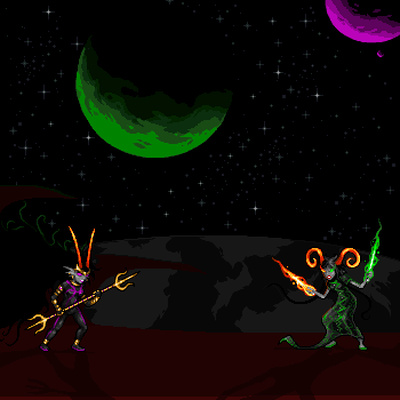 Tags: The Handmaid, The Condesce

I find that a lot of my Homestuck tracks tend to be medleys: One of my first ideas for a track was the Gamzee vs. Dave rap battle with all their motifs as a backdrop (that never really picked off because UGH, LACK OF VOCAL TALENT ON MY PART). This one follows a similar vein; Her Imperious Condescension vs. Lord English's Handmaid. I wanted the track to show how tired of life the Handmaid had become, so a lot of her motifs get cut short quite abrasively by HIC's "attacks", as it were. She puts up a little bit of a struggle sometimes, but eventually she just accepts her fate and lets herself be replaced. So ends the tragic life of the Alernian Ancestors.

All of Scarodactyl's art was actually slightly smaller than the resolution I used for this booklet. Hopefully upscaling it didn't ruin the pixels too much.