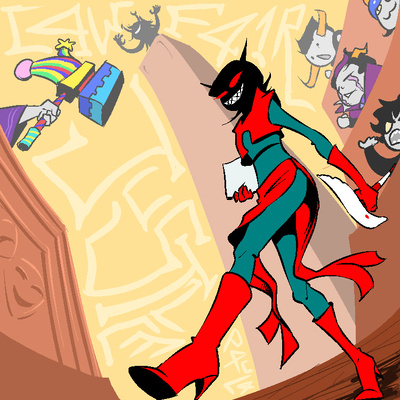 Well, I certainly didn't expect this song to take off like it did! What was originally just another remix suddenly became one of my most well known and recognized songs! It all started when I saw an interesting post speculating what instruments the trolls might've played. There was harp for Aradia, there was guitar for Tavros, and for Terezi it had clarinet. As soon as I saw that, I knew I had to do a jazzed up remix of her theme. So for about two days, I transcribed the melody, worked out some chords, and did up a bassline and drumbeat. It was kind of weird working on this song, since I was using the unconventional 8/4 time rather than 4/4 time. The reason for this was to make the eight-note swing sound like sixteenth-note swing. Although I'm not as much into Homestuck any more and I feel as though I've written better songs since then, I am still pleased that a lot of people liked this song!

This track was actually slated to be on LOFAM 2 originally, but got pushed back for some reason or other. This art's been around since then. Very dramatic.