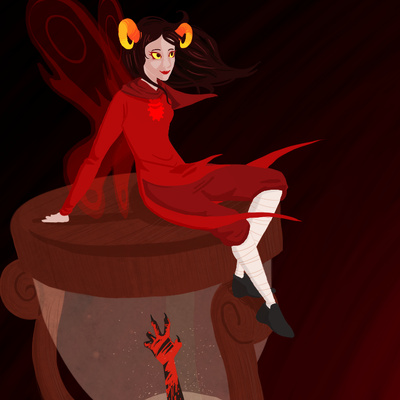 The Demon and the Alien

Tracks that The Demon and the Alien references:

Although MeGaLoVania is an awesome track for [S] Wake, I felt that it didn't really tell the story of how Aradia arose, and eventually faced Jack and vanished through his frame into the realm of the Green Sun. And with my love of psych0ruins and Liquid Negrocity / Black leading me to sessions on the piano playing around with the song, a steady chain of events started forming as I played around with the medley. Imagine the events of Aradia's half of [S] Wake playing, plus those pages that come a little while after where Aradia stops Jack in time (note the 'ticking' of the high notes late in the piece!) Of course, I had to pay homage to the original track used for the flash. What you hear is played live, too! (albeit through a MIDI keyboard) Many thanks to Lunatic again for providing assistance - it's insane the air this guy's got.

Since Aradia came back to life she's been entertaining nuts, and I had this image of her sitting with a calm smile on her face while Jack is trapped and PISSED. I thought it would be fun since Aradia takes everything so in stride, and when she first becomes God Tier she freezes Jack mere seconds before he kills her, with a big smile on her face and no worries. I wanted to go with something like this, Jack being trapped in 'time' and Aradia sitting by sweetly.