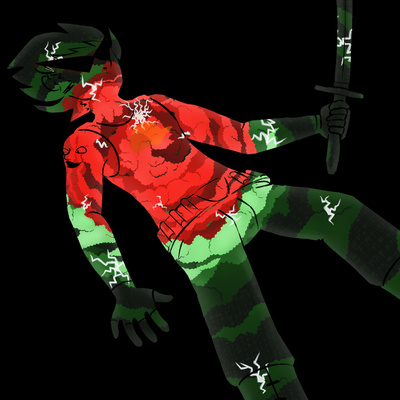 I made this shortly after LOTAK was first revealed, and I wanted to capture the pressure and paradoxical claustrophobia of that huge space blanketed by a heavy, inert atmosphere. I started with the drums, which were just an attempt to create a kit from scratch that I didn't entirely hate, plus a ton of reverb. Next came the atmospheric elements - the distorted tremolo synth, the piano, the echoing synth bleeps which to me are a signal intended to guide the player, decayed over the aeons the planet has waited for Dirk's arrival, and the nearly-metronomic hat-click to reinfore the senes that, now that he's here, his limited time is rapidly ticking away. Finally I tried a few string melodies for the middle section, but simply nothing says 'towering ancient remains of a lost civilization' as effectively as Erik Scheele's Ruins, so I stole it and added a sort of contrapuntal harmony underneath. And now I give it to you.

I was beyond excited to get to be part of another fan album, especially to be drawing for a song connected to Dirk's planet, since he's one of my absolute favorite characters. Every kid/troll's planet reflects them and also challenges them at the same time. LOTAK is one of the more dangerous planets, with its constant raging lightning storms and the most powerful denizen at its center, fitting for Dirk who is a determined, skilled fighter. The planet is also a contrast, a planet full of tall buildings for someone who grew up in an ocean surrounded by nothing. I really wanted to show LOTAK as an extension, or part of, DIrk himself. The song itself gives a sense of floating, or as the musi artist said themselves, a very spacey feeling, so I tried to capture this as well, with the overview shot of the planet that Dirk appears to be floating over. I hope that others who look at my piece will feel I managed to pictuer the song well in my drawing for it.