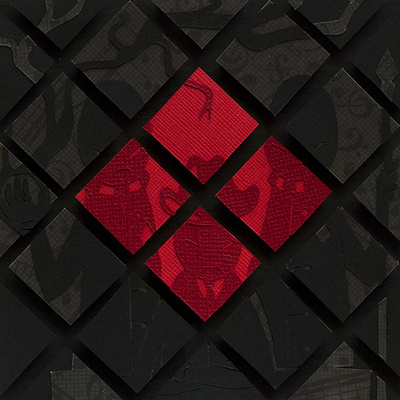 Tracks that Party of Three references:

Hello there! I'm very excited to be a part of LOFAM 3! This is the first time I've been a part of a LOFAM album, and this tune is the first one I've ever done as a collaborative project with someone. I had a blast working with Joe. He's been a very supportive friend and music-making mentor and I couldn't imagine working with a better collab partner. I was tossing the idea around for a while to do something for the Draconian Dignitary / Diamonds Droog, so I was very happy when Joe went along with the idea. It turned out a lot different than I expected, but in a very good way! I'm pleased as punch to have been a part of it.

This was a collab between me and Cullen! I had a ton of fun working on this with him. It was his idea initially to mash up a few songs featuring DD. I didn't really expect it to turn into a dubstep piece as I had no experience making the genre at all!

I wanted to go with a simple but striking design that worked on two levels: the large diamond with the grey layers, which looks good as a thumbnail on a small ipod screen or similar, and the silhouetted shadowy type DDs that are more apparent when you view the art at full size. I'm really happy with how well it worked out!