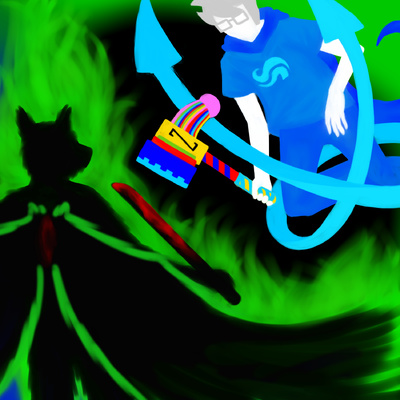 Irradiated is really an identifying track for my work, I've been told before that this track is the first that came to mind when mentioning my callsign SparksD2145. Similarly to a good portion of my work Black/Liquid Negrocity's leitmotif plays a prominent feature in the composition, providing the base melody for the entire track. The idea for Irradiated spurred from [S] Jade: Enter, as a high-velocity and energetic track with none other than Jack Noir at the center; my goal was to take Black and give it a different feel. After a short hiatus, my track Irradiated featured in my first tribute animation on YouTube for Homestuck.

Irradiated is among the first Homestuck fanmusic tracks I ever heard, so I was very pleased to be able to create art to accompany it on LOFAM2. I decided to draw inspiration from AutoDevote's first HS fanimation, which to this day remains one of my favourite Homestuck videos. I'm not particularly apt at composition or shading or several other things, but I'm pretty happy with what I accomplished here.