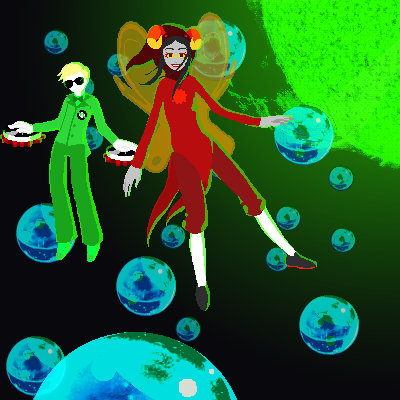 If I had to pin this song to just one of Homestuck's swelling cast of characters, it would have to be Aradia. When we first meet her in the Hivebent act, she's an emotionless ghost who later becomes a ghost frog, then a ghost in a robot body (or a "ghost in the shell" :rimshot:), before making her final sea change into a cheerful fairy god with time powers (which explains the ticking and subtle reverse melodies of the song, at least). The peppy piano and melancholy backing strings and woodwinds represent these aspects of Aradia's presonality - accustomed to death, she acts as a cheery Charon for her fallen teammates. I built the piano melody (and the title) out of Alex Rosetti's "Crystalanthemums" because to me, ever since [S] Make her pay, the tune has been irrevocably linked to the trolls, Aradia, Terezi, and Vriska in particular. It also translated to a peppy piano melody much better than Toby Fox's "psych0ruins" would have.

This song is also an homage to Michiru Yamane's impressive body of soundtrack work for the various Castlevania games.