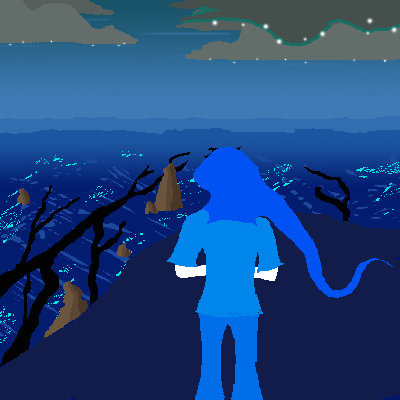 The Land of Wind and Shade

Tracks that reference The Land of Wind and Shade:

The cool blue landscape of LOWAS, with its winding rivers of oil and bio-luminescent sky, has always been one of my favourite pieces of imagery from the Homestuck Universe. Its dreamy topography sucks me in, and before I can protest I've been seated and presented with a wine list. "Nothing but the finest fermented crude for you", they say. Well okay. It's not particularly tasty, but it's nice to look at and has a nice finish.

I compose a lot of music for solo instruments, not so much for electronics. When it struck me that I might like to make a tune in tribute of Homestuck, I immediately thuoght of the cobalt vistas of LOWAS. I was playing around with a new tuning at the time (I'm a huge fan of weird guitar stuff) and found that it had the most amazing capabilities for melody and harmony using nothing but Harmonics! Eventually I just hit the right notes at the right time and the piece practically wrote itself.

I'd like to shout out to the Music Squad for being rad bros, and a super relieved thanks to Silence for helping me mix the tune.

There, uh, isn't that much to tell about this piece. I had originally envisioned John sitting with his legs hanging over the edge or something and I have a clearer idea now of what I could have done! But this was back at the start of the project and my art skills were rusty so yeah. Very simple piece. Just the land based off of what we see in the comic, and John.