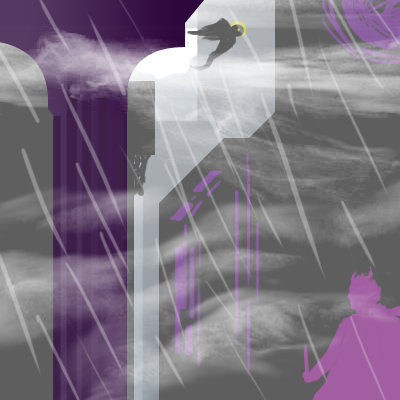 Land of Wrath and Angels

Land of Wrath and Angels was a melody that I had been ignoring for about a year now. I brought it up when we were trying to hash out some Troll leitmotifs and instruments for the Hivebent Radioplay (remember when that was a thing?) It was for Eridan(!) I guess I liked the idea of him pining over a giant pipe organ cause he thought that's what evil guys are supposed to do whenever they get scorned, by girls usually. I myself felt the sick sting of scorn when Dacen suggested an accordion or French horn might suit Eridan better. WELL FUCK YOU DACEN. LoWaA was the last in a series of 12 short songs I made for the Troll Planets. It was actually revealed a solid 4 or 5 months after the other 11, so I really wanted to make it stand out as the big finale of my (kind of pointless) musical excursion. I'm also lazy though so I just rehashed an old melody I had lying around. Then I threw in some rocking guitar and pounding drums and angry synths and called it a day. At some point I realized that the initial melody kind of gets lost in the balance, so I repeated it at the end all clear and pretty-like with harps and clarinets, which actually turned out to be my favourite part of the song, so yay.

Mud Fact: I wrote the second part of the melody when I was 12 and trying to play the Castlevania 4 theme by ear. I was kind of dumb when I was 12.

LoWaA was the first piece where I started to get creative. I saw a really cool looking LoWaA on DevArt and wanted to replicate the gothic atmosphere it created with the same color scheme. So I came up with this. A cathedralesque building in the foreground with Eridan sneaking around and a collection of other buildings in the back with Angels looking for him.