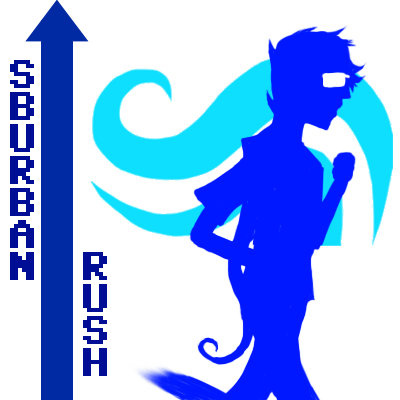 A while back, the MSPA forums had the "Forapocalypse", and everyone had their avatars enter the medium one way or another to 'survive' the forums going down.

I was a little late to the party, so I decided to have a little fun at my own expense by starting a forum adventure called "The Straggler", in which my character is late and must enter the medium on his own.

I basically condensed the beginning events of Homestuck into a 20 second flash animation, so I decided to play on that same idea for the bgm. I came up with a remix that was a 20 second 8-bit loop track based on Sburban Jungle. I added the bridge and fadeout at a later time to make it nicer to listen to on its own.

I have always liked silhouette pieces. I knew that I wanted to draw John running. I briefly considered doing all four kids but decided against it, Sburban Jungle is John's theme after all, and the color scheme would look better with just him. From there it was a simple matter of posing him and arranging the rest of the piece. I think that this is one of the ones I am most proud of, even if it's very simple.