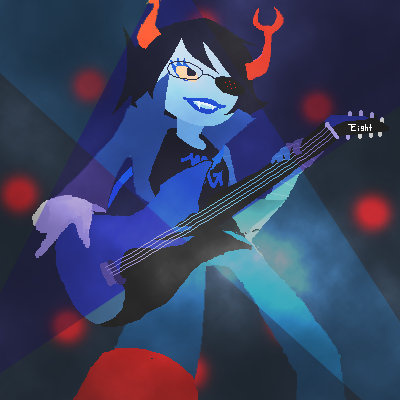 When I heard the original MeGaLoVania, it was the synth-sounding bit in the Alterniabound flash, and not the full album version. So I genuinely thought I was doing a rock cover of a synth-rock song and didn't mess with the instrumentation or anything else too drastically. Kinda wish I had in retrospect for differentiation's sake.

Strangely, the guitar used to record this broke shortly after doing so, followed by a massive string of equipment failures with my studio setup, so I wasn't capable of redoing the track for this release. I blame using a seven-string for what is now apparently an eight-string's song and somehow getting cursed with horrible luck. Alas, you can't blame fictional children on an insurance claim.

MeGaLoVania + Rock. A potent combination when mixed! A similar yet more complex piece when compared to A Fashionable Escape. Both had characters that I cut out of the panel and edited to fit my purposes. I really do like how this one turned out though. My original draft had curtains on each side of her. I went back and cut them out though. I thought "okay, it's metal, there should be smoke". The lights were already in place so when I added the smoke effect I was awed by the effect it had. From there I touched things up and added Vriska's background lights. ::::)