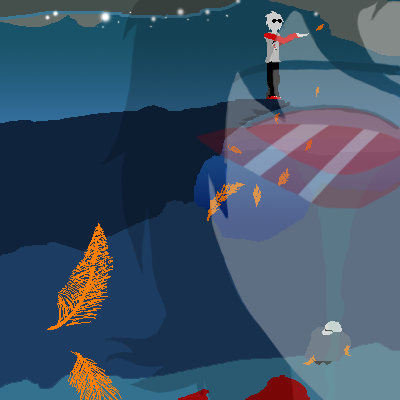 ok so first there's like this bass and then it's like WHOAAAAAAAA some fucking synth thrown in there and then these drums come in and that weird plane noise and then some more drums in the background and then everything drops out and it's like oh wait what happened and then there's another synth that comes in and then the drums come back in and go all clacky clack clack boom boom and then there's some like record scratchers and stuff repeated really fast and high pitched and then stuff drops out again and then some new drums come in for a bit so then you have some of the other stuff that dropped out come back in for only like 10 seconds but then they drop out and then that one synth comes back but it has a filter on it to make it sound all freaky deeky and then the song ends.

you know, just in case you're deaf but still want to enjoy this song.

For this one I was at a loss on what to do. I turned and asked Trogg what he thought it was about and he said the bond between Bro and Dave. And so this became a piece about Dave. I thought it fit with the song title to where it be post-Bro's death and it being Dave unsure about what to do from there. Dave is doubting his own abilities and giving Davesprite and Bro a send-off while Terezi watches through her monitor ashamed of what she has partially caused.