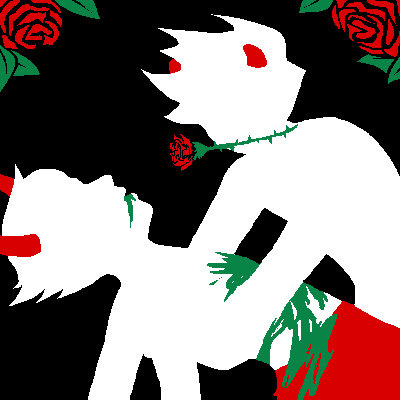 I wanted to pay tribute to the "2X CORPSESMOOCH COMBO" in the form of a song, and I decided on a whim that Ectobiology would be the perfect song to remix in order to do so. The saxaphone sounded like Microsoft GS Wavetable SW Synth, so I experimented with slathering reverb on it. I came across a preset that made it sound like the saxophone in "Audrey's Theme" from Angelo Badalamenti's Twin Peaks score, and decided that this was the new direction I wanted for the song. Towards the end, it features tremolo picking, which I feel is my signature guitar technique since it's the only one I can pull off that sounds remotely impressive.

The name of the song doubles as an excellent echeladder rung name for Karkat. I picture him reaching the rung and being really confused by it until way after his Sgrub sesion, when its true meaning became apparent.

This song sounds like something you might tango to, so I wanted the pose to initially look like they were dancing, but then Kanaya's blood and limp frame sink in. I thought Kan's red skirt and jade blod coinciding with roses made a beautiful limited color scheme. I also didn't want too much detail to tip the moment too far into silly or somber, as it really is both at the same time.