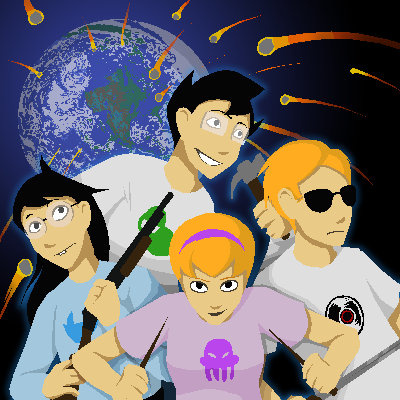 The Drawing of the Four

Tracks that The Drawing of the Four references:

The title is, of course, a blatant reference to Steven King's Dark Towerseries. The song is a build-up to each of the four kids entering the Medium (they're being "drawn" into the game just as Eddie, Susannah, and Jake were drawn into Mid-World, but that's enough for now about something that isn't Homsetuck), so we start out with a slow rendition of "Sburban Jungle" played on the piano (John's instrument) with subsequent accompaniment by a violin (Rose's instrument). Then, here come the drums (Dave's instrument), and we kick the song into high gear when the flute and bass (both Jade's instruments) come in. There's a long period of pseudo-improv from the bass, flute, and violin before returning to the meat of the song - and a nod to the Squiddles theme (another reference to Rose) before the finale. Curiously, the order of the instruments exactly matches the order of the kids' introduction.