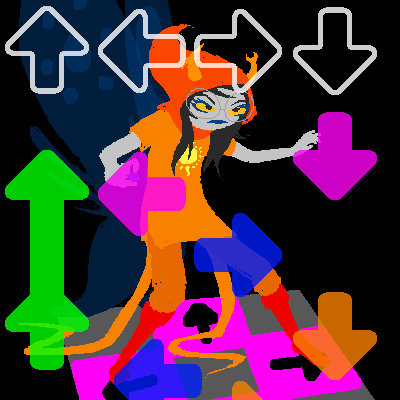 One fine day I got the idea for a MeGaLoVania dance remix, but I sat on it because frankly? I don't actually enjoy dance music. Or techno. Or whatever genre this classifies as.

Several days later, I was trying to conjure up music for Nepetaquest. But I was drawing a blank because "MeGaLoVania dance remix come on guy you want it" was stuck in my head. So eventaully I was like "OKAY I'LL DO IT SHUTUP"

And then once I got started, it just grew. And grew. And grew. Like cancer. MUSICAL CANCER. Before I knew it I'd stuffed most of the kids' and trolls' motifs in there. There are 20 melodies I used (albeit some only for veeeery short segments). It started off with 16; I expanded it slightly in the process of revising it for the album. See if you can spot them all!

Fun fact: when I was composing this, I didn't even realise I'd ripped the chords from Sburban Jungle until much later.

I made this image before I even knew about the album. The visual reference to Dance Dance Revolution (DDR) fits with a track named MeGaDanceVaNia.