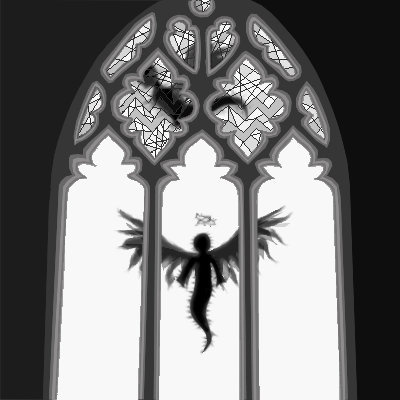 Hi kids this is the song I made for EridanLand but Radiation didn't like it so he slapped me down and told me to get out of the music team. Just kidding, that didn't happen. Maybe. Anyways, this song was really fun to make. I tried a lot of crazy sound-manipulation things I'd never really tried before for the breakdown and outro, and I really feel like I succeeded with them! The main theme that happens on the rhodes is really fun to play, and might become a prominent theme later...? Either way, I hope you like this song as much as I do! Much love from Kali, thank you for listening!

The window outline is taken from the Christ Church cathedral in Oxford and originally depicts St Cecilia. Several million free-select clicks later, my wrist was dead and this was the result. The stark colour scheme is a result of trying to make it look suitably dramatic.