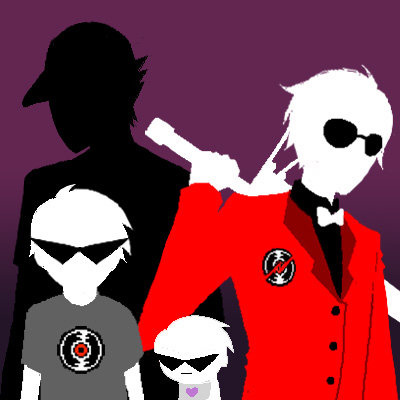 Tracks that Growin' Up Strider references:

Growin' Up Strider fills a pretty obvious niche I guess, a cutesy song to montage Bro raising/training/abusing Dave, parallel to John and dad and Homestuck Anthem. The whole time I was making it I had DJ School from Rhythm Heaven stuck in my head, which is another cutesy song about another pair of cool dudes who are also learning to scratch records. So I guess I stole that. They probably weren't brothers though on account of how one was blue and the other was a robot I think. Lemmings had an influence too, which is to say that's where I stole those high-pitched bleeps from. I didn't even think to use Beatdown for the melody until I had prety much built the rest of the song around it. I had an old midi (by Tenebrais I think) and started goofing around trying to play it out in a major key and it fit pretty well sooooo that's that story.

Also I have no idea what record scratching actually sounds like so I just downloaded a bunch of cheesy "dj sound fx" and tried to make a cool rhythm out of them. That little breakdown in the middle is supposed to be Bro playing a line and then Dave answering. Then they trade off some more. Then they both start playing at the same time, like back to back or something cool like that, and then it goes back to the main melody. Did I make that obvious enough? Maybe I should've made Bro a bit louder in the left speaker and Dave a bit louder in the right. Actually hold on I'm going to go do that.

There was pretty much no way I was not going to jump on "Growin' Up Strider." I love Dave (and Bro). It ended up not being very creative, but the thought of baby Dave in his horse leather bib and tiny shades makes me smile.