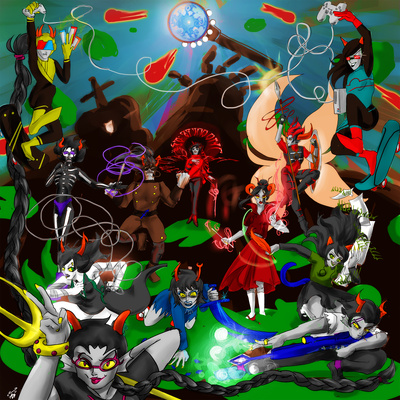 This piece... I don't think I've ever had a chance to write anything like it. It was insanely challenging, least of all trying to find some way to fit in all of the principal tracks. I've tried my best to include something that sort of sounds close to each of the tracks while telling a story, but I apologise if it's not exactly what or as much as you expect.

I could spend a while talking about this so I'll just note a few things: Kurloz mimics RDA like Gamzee did. Aranea attempts to make a big show against the king around 4.33, but fails (Porrim steps up to help after this). The Thirteenth Hour appears at the end of the Mituna/Latula section as well. It's something "ve always wanted to reference in a track and seemed appropriate for thsi song that was literally finished in the last hours of the project. I hope you've enjoyed this album as much as I enjoyed spending several long nights toiling over this piece.

The fight with the Black King is surely one of the most exciting parts of the game, and I tried to show the spirit of the fight that each Beforus troll would have. The order of trolls on the picture follows the track, and each one has been assigned the most possible fitting weapon that would help them fight the Black King. In order of appearance: Kankri (Social Justice speech), Horuss (untamed strength of bare fists), Rufioh (spear and shield), Kurlzo (chucklevoodoos and needle with thread), Meulin (written fanfiction), Damara (wands), Porrim (glow and the Gigli chainsaw), Cronus (Ahab's Crosshairs), Mituna & Latula (Troll Playstation), Aranea (dice and Mindfang's sword), and Meenah (2x3dent). The visualization of Black King is left to the imagination of the audience.