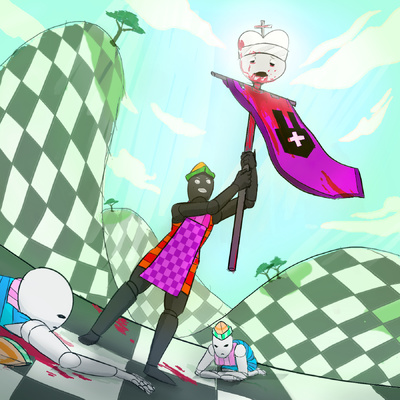 I honestly can't believe this got in. I mean, don't get me wrong, I'm satisfied with it, but seriously this took ages to get to a publishable state.

Prospitian Monody started life as a techno/ambient fusion with acoustic instruments in for fun too, which is a fancy way of saying I have no idea what genres actually mean. It also had a completely different melody. People told me the piano didn't fit so I made it synth, people told me the melody was aimless but couldn't explain why so I just rewrote it and blindly hoped, and they liked it but then production sucked again so I made it orchestral, and then the whole thing became synth instruments, which I kind afound bland but also it works well and I don't know what else to do. ANYWAY ENOUGH RAMBLING ABOUT USELESS FEEDBACK LETS GET TO THE SONG ITSELF

A monody is essentially a dirge, except that it's not a dirge? It's dirgeish anyway. (fucking hell ost) This is like a funeral hymn for the White King, but the Dersite army is slaughtering all the Prospitians that try to mourn, so in the end the funeral ends up being held by some Dersites who aren't sympathetic to Prospit, but do respect tradition and politeness and etiquette and so on, so to compensate for it being a funeral for the enemy they make it all imposing and evil. (The Black King is too busy ending the world to notice.) You could sort of view it as a counterpart to Broken Dreams [Prospit's Fall] on the SBURB OST, but focusing more on Derse's triumph than on Prospit's downfall.

Jas posted a quite different original version of this art, showing a funeral procession of sorts for the king's impaled head, but replaced it with this even more impressive composition featuring a more dynamic posee and focused around a central Dersite. There was some disagreement on the discord server whether it looked better with or without the tree in the top left, which ended with the tree being put in at 8% transparency.

Also johndave is a bad ship suck it viko