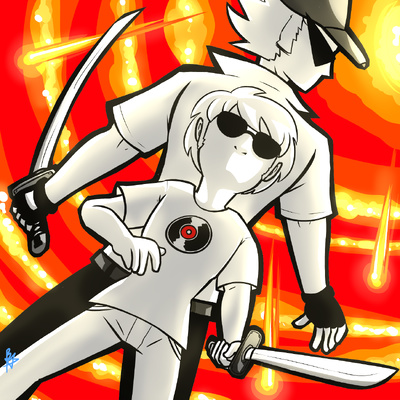 This song gives me vibes of a "prelude" version of the original Beatdown, like one that plays as a character's theme before a boss fight where the boss music is just a more complete and amped up rendition. Or maybe it's like an encore of Beatup where the DJ gives the backing track a little more flair. Either way, the fact that this song uses only the opening arpeggios of Beatdown throught its run works hella well as a lead-in to the next track, Airtime Assault, which dives straight into the main melody.

This art reminds me of what could have been. Oh, Bro. You could have had it all. A sweet hipster ninja buddy just like you who had your back at all times, who enjoyed being with you and never fought against the blade. You could have trained him with such bullshit free discipline mixed with such terror free compassion that his genuine confidence would never let him lose again. Not even to you, the teacher, brother and father. Then you two could stand back to back while this badass music of fraternal teamwork played in the distance, complete with a backdrop of blazing sun and raging meteors. But then you just had to throw the kid off a building and make his daily life hell. Thanks for nothing, man.