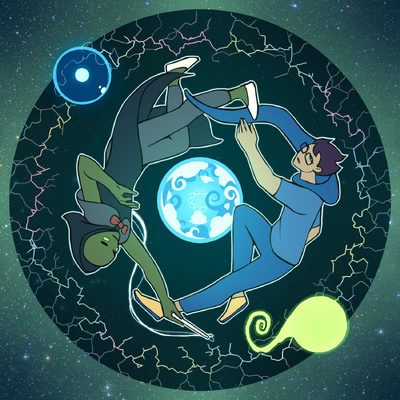 Back in 2016 I got together with RJ Lake and James Roach to compile Homestuck Vol. 10. Everyone was pretty hyped, and there were threads in various places full of people feverishly speculating about what the tracklist would be. Much of this speculation focused on whether Toby Fox's elusive song Penumbra Phantasm would finally see release, founded on the rumor that he had agreed to finish it for the album.

Around this time, a couple of us on the Vol. 10 project decided to have some fun with the speculation and put together a fake version of the album to "leak" to the fans, so we gathered a few WIPs that'd been cut from Vol. 10 and arranged them at the beginning of the album for an illusion of Authenticity™. Jamie Paige put together a bunch of awful low-effect vaporwave remixes of Homestuck songs, which we gave names to match what the fans were hoping for. Finally, as the keystone piece to tie it all together, we referenced an old Toby Fox piano recording and created a short (but hopefully convincing) song that we titled "Penumbra Phantasm". Christened by Toby's seal of approval and an unholy melding with a vaporwave Sunslammer monstrosity, this one-minute-and-fifty-second piece quickly became a fan favorite once the [sock?] ruse was revealed, and we promised that this "Pseudumbra Phauxtasm" would see an extended release on LoFaM 4.

A year later we've completed this track, and now the latter third of the song is just a power metal cover of the Breath of the Wild theme, but that's a story for another day. Ask me sometime

This is a highly stylised representation of Act 7, with Alt!Calliope creating the black hole that consumes the entire universe, and Joh nreaching for the knob of the door into the new universe. They circle around Skaia, neither pulled into ti nor escaping it, but trapped in the loop of its inscrutable machinations. This scene is set against an image of Paradox Space cracking at the edges, which also resembles a cracked disc: the final disc of Homestuck, shattering at the edges, foretelling of the destruction of the story itself.

While this image wasn't originally made for Pseudumbria Phauxtasm, I think it is a fitting illustration to accompany it: this track is an expansive and beautifully-made arrangement of the elusive Penumbra Phantasm, a track that has been kept under wraps for almost as long as the end of Homestuck itself.