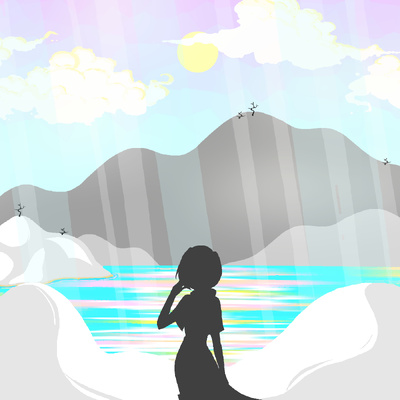 This piece was originally for CaNMT, although it was still about the character Rose Lalonde. Perhaps you're wondering why someone would release a track on CaNMT, before putting it on LoFaM, but that was due to my joining LoFaM after this song was published. I worked on this song for nearly 2 months, so the production was a pretty complicated process - but at least I could finish it. It doesn't matter how long it took, what matters is that it's done. Originally, using pianos wasn't a part of my plan - the step before it was to use violins and Pavellion strings, because violin is Rose's instrument. But I couldn't pull it off so I switched to extremely romantic pianos midway through production. However, if I did take the pianos off I feel this track would've suffered a lot of pain, barring its size. In the end there really wasn't much that survived of my original image of this track, but I'm still happy with what I ended up with. Lightfall was my first song published anywhere, so you could say this is a big song for me.

I envisioned the scene of Rose playing on LOLAR for this art as well as the song. I can't count how many timse I redrew this piece before finally getting it to look good, since I'm only a beginner at drawing scenery. I'm glad it turned out nicely in the end though. Also I gotta say, doing art for your own songs is kind of weird. :p