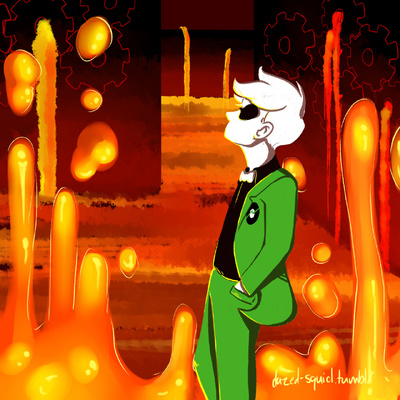 This song represents a lot of firsts for me. My first piece of Homestuck fan music, my first time composing for an ensemble of orchestral instruments, and the uh... second song I ever wrote in a digital audio workstation. I read Homestuck in a feverish marathon in the Fall of 2010 while taking a class about playing in a rock band and recording music (my high school was very cool). Around that time, I'd also been sequencing MIDI files in Anvil Studio (a program which was also the genesis of Bowman's MIDI experience), and had only recently discovered that Logic also had MIDI sequencing capabilities. After falling madly in love with the Homestuck soundtrack, I had an epiphany to the tune of "holy shit, I know how to make stuff like that!" and Atomyk Clockwyrk was thus the result. I've come a long way since then, but it's a testament to the quality of Logic Pro's stock library that I managed to make it sound this good with minimal knowledge of production. A little volume automation, slap a limiter on top (not even Logic's wonderful Adaptive Limiter? Come ON, 16-year old Marcy...), and blam, what you're hearing today is a time capsule of what I put together in December of 2010.

Dave is waiting in his land. For what? We're not quite sure. Perhaps he is simply waiting for one of the countless time loops he has employed as hsi session's time player. In any case, it can't be comfortable wearing that suit in that heat. I guess that's the price of being a c o o l k i d though.

Fun fact actually, this piece had a couple other variants before this version, which had Dave wearing different colored suits. One was white, and the other was red. However, after dazed-squid was suggested to try a green one instead, it managed to catch the eye quite very well indeed. As such, the green version stuck.