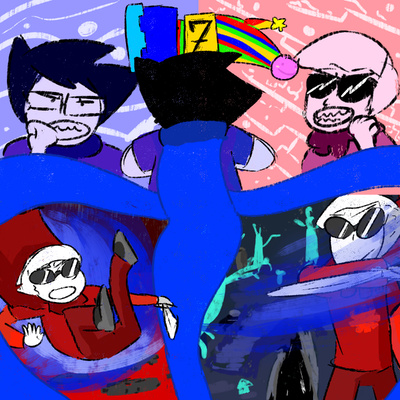 I wanted to combine several things I learned while at college but the only way I knew how was to mash together 3 of my most favourite songs together, Doctor Beatdown and Jungle.

I've learned to mix and match certain sections of a song to a better over composition. As for mixing, I had my music tutor (A semi-popular DJ) listen to the track and give their feedback. I then used this to make the overall song so much better.

So this art is for Airtime Asasult, which was originally named Dave v John, which is a boring as heck name if you want my opinion. There was one slot left for art and when I saw this posted in announcements I decided to take it. I haven't drawn John or Dave as much as I have my favorite Homestuck gals, so getting things right was a bit difficult at first. I started work on this in June and as time went by and I got more done, I was getting better with my art style. If I had went and finished this in a day, I don't think it would've looked nearly as good as it does. The idea came from me thinking about how John and Dave would battle. I figured Dave would abuse time travel and John would be able to retcon around, making for an interplanetary fight between good buddies. The top drawings of John and Dave are intended to look silly, as it's not likely they're fighting over something serious. Anyway this was really fun to do and I hope you enjoy the rest of the album and junk!

(ps, viko told me to say johndave is canon i guess)