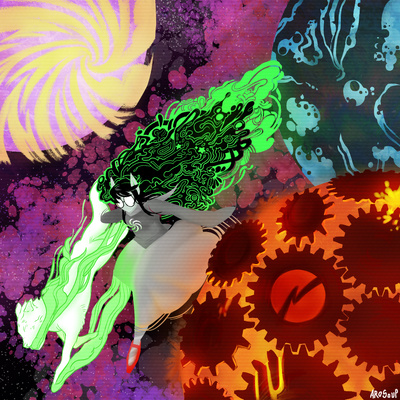 This song began when I was messing around and thought I wanted to make some v a p o r w a v e. I really like the glitchy sections of Gold Pilot, and my initial plan was to slow those parts down, loop them, add drums, etc - the usual vaporwave stuff - that's also how it got its name, thanks to its project file. However once this started to happen I realized what I had written was very different, and that it had turned into some strange Gold Pilot remix. While I worked on other things for UMSPAF and CANMT, this song was on the back burner and I wasn't sure I'd actually finish it, but I stuck with it and just added things as they came to me (I'll admit that Lambda showing some interest in the song was a bit of motivation). At some point one of the later versions ended up getting accepted to LOFAM4, which was a surprise to be sure, but a welcome one, and so I wrapped up production.

Some other facts about this song: Quite a bit of the unstrments (I'd say about 80% or so) are modifications of default Garageband synths/presets. This is the first song I've ever made that regularly causes audio overloads on my computer from just playback. The name, "Pilotwave" comes from when it was going to be vaporwave, I named the project file that and it sort of stuck. Special thanks goes to everyone that listened to it and helped me with balance/mastering issues, and extra special thanks to AroSoup for their amazing art!

This took a really long time.