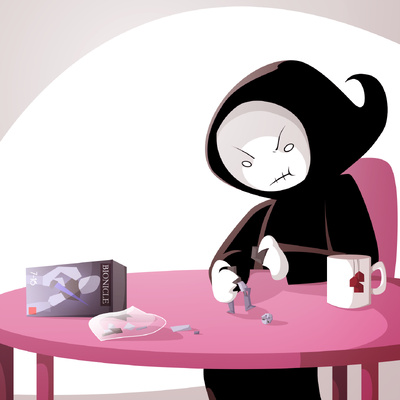 This piece was originally written for a different album, centered around the theme of Problem Sleuth. Given the jazz-era vibe of Problem Sleuth I decided I'd make something jazzy, and I figured it'd be nice to do a downtempo sort of theme, which I originally intended to represent the character of Godhead Pickles Inspector. With that in mind I sort of set to work trying to find a jazz chord progression that worked. After a bunch of fiddling about at the piano, the one I ended up with draws a lot from "My Favourite Things" and "Nardis", and so I worked out a melody of sorts over that in Ableton. Saxes are pretty much standard for jazz, and I picked a Rhodes soundfont over a piano owing to a distaste for the way a lot of piano patches sound. The sax solo I sequenced manually, and the accordion solo I reocrded as an improv.

That's a difficult question to answer, exactly, but somewhere along the way, the track became reinterpreted as a theme for Death and the afterlife. "But what is that figurine that Death is playing with?", I hear you ask. That's the sort of question that invites what is oft known as a "long story", but a simple explanation is as follows:

For centuries, the bottom of the deepest seas had been shrouded in mystery and superstition. Some say it's a hostile place inhabited by the strangest creatures. Others, that it's a prison for the most dangerous outcasts. Legend has it that the only hope of ever getting out of there is a mask, that every deep sea creature has been craving for years. A mask they say, everyone is prepared to figut for, and risk their lives to possess. But the only way of ever finding out, is to go there and see for yourself.

Look, I should never be allowed to draw Bionicles.