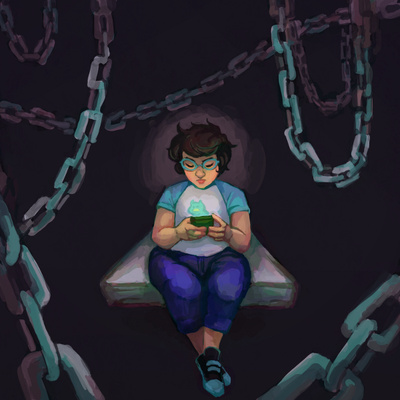 This is by far my oldest song on the album, having been created only a couple of months after LOFAM 2's release. The image of the Alpha Kids talking out their problems on cold stone slabs, in the middle of a hollow moon's core, really stuck with me. I set out to make a theme that would convey the melancholy, expansive atmosphere of that scene. The long pauses give off a sense of unsureness, while the echoing background noises bring us back to the chaos currently happening on the planet surface.

Also, this cryptic crypt song was partially based on Sburban Jungle and cryptically took inspiration from Sburb OST's Outer Reaches [Veil] cryptomnesially. The song does not have anything to do with crytpids. That's Quest Crypt.

The A6A5A1x2combo is -apart from being a mouthful- a very introspective breath after a wild, high-octane sequence. My early draft for this piece featured all four alpha kids on their respective devices, but it felt too engaged, too connected. I think this song is more reflective of solitude (the solitude that comes despite being in simultaneous chat conversations with two other people), and I hoped to convey that.