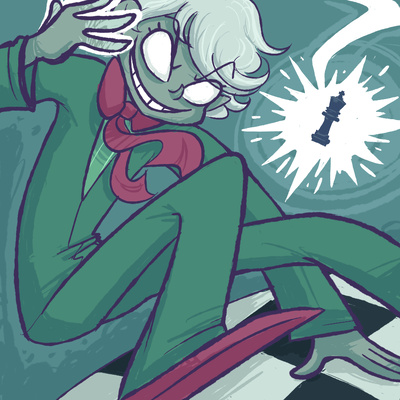 Beyond the Death of the King

Tracks that Beyond the Death of the King references:

Likely the oldest art on the album, this dates all the way back to LOFAM2 days. The song never did get finished for that era but stuck around until the song got made and finished in time for LOFAM4. It turns out that in the end, playing beyond the death of the king was a metaphor for the art's living past the end of the comic...

I must confess to loving this art style, with mostly aliased lines and two-tone shading, especially in its similarity to some of Andrew Hussie's own art in Homestuck. It's none too common to see fanart of Calmasis, so it's nice to see them rendered in a more dynamic pose than the only canon one, while still clearly recognizable as that same antihero.