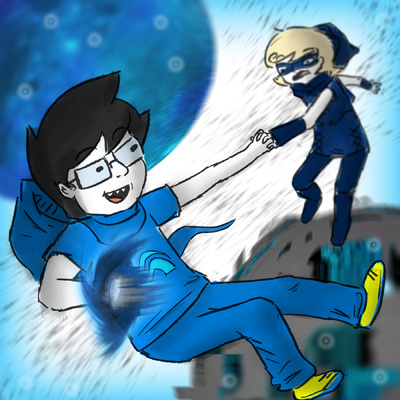 As one of the oddball Retcon Lovers out there, the scene where John becomes unstuck in canon is one of my favorite moments in the entire comic. Thinking about it inspired me to make a song about the retcon; specifically, the introduction of John's powers, followed by the way they're used to save the entire timeline from its catastrophic doom. This time around, the game gets completed... but maybe the ending isn't so happy, as we're reminded there's still four kids trapped in the retcon juju, waiting endlessly for freedom in paradox space.

Some trivia: this song was named after an update discussion thread on the old MSPA forums. Apparently, that thread was in turn named after a TVTropes page. Also, alongside a Homestuck Anthem quote at the end, the music box refrain featured throughout the song quotes the foley on Homestuck's title page. That's both because it's where the retcon arms first appear, and because I always wanted to reference those windchimes. Now you know!

I've always loved the 'John's retocn adventures' section of Homestuck, and I think it has to do with how it leads both the characterts and myself along a brisk rollercoaster of twists and turns, through unknown paths - this sense of adventure is what I tried to convey in this art.