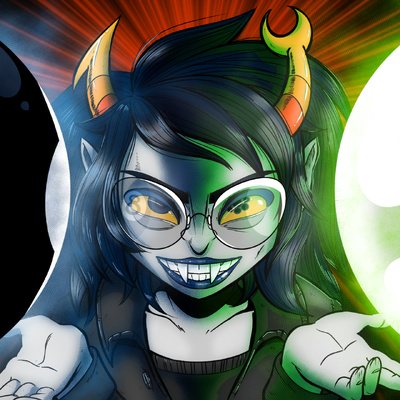 Tracks that All the Luck references:

Xoro was working on a little 8-song Vriska album concept for the CANMT, to be released on 8/8/2016. Though the idea never came to be, he made a couple songs for it, which then languished on the main tab of our organization sheet. Reading through the list of semi-abandoned songs there, I convinced him to put it on our Volume 8, so it ended up with some 8-related action. At some point, either the LOFAM judges listened to the album and felt it was a standout track, or Xoro submitted it on his own. The latter is possible since right around then was when Lambda put out an open call on /r/homestuck for song submissions. Either way, Xoro felt the song could bei mproved, so the song as presented here is an even more polished version of the v8lume one. Relistening, many of the changes jump out. Right away you can tell some of the instruments have changed. (Enemy Approaching, the Undertale song, is still an obvious compositional inspiration, even though the instrumentation being less electronic makes this version less similar in that sense.) Some of the mixing is better and more punchy, a skill that Xoro excels at. Terezi's theme opens the bridge, after which the song contains new composition. Returning to the original motifs of the song after the bridge, it continues to put a new spin on them. I never cease to be impressed by the musical improvements of my friends in the Homestuck fanmusic community. And I'm glad that in a managerial role, I can facilitate others' improvement. Let's all give Xoro a thumbsup for the great work here.