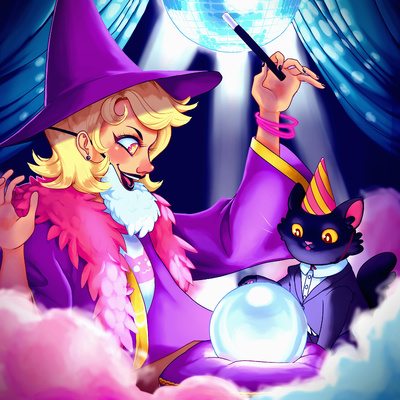 The music reminded me of a disco party, so I tied that in with the name of the song and created the most fabulous fortune-telling session I was able to. It's OOC because Roxy knows that only nerds half-ass their wizard cosplays. In reality it would be a proper tunic, silk closure beard, and 230% more glowsticks.

This track was made a while ago (originally for Colours and Mayhem if I'm not mistaken) but didn't get the attention/nomination to end up on a contemporary LOFAM. Fast forward to 2016, when CHamango releases his third pro as heck guide to homestuck, highlighting this song as his favorite fanmusic of all time. It's not hard to see why if you listen to the track. The publicity brought it to the eyes of the LOFAM team, who were glad to add it. This whole story is basically an excuse to hsill Chamang0's awesome [S] Jade and Calliope: Rumble. and pro as heck guide to homestuck videos, but it also serves as a reminder of how far this fandom has gone, and how much history lies behind this amazing fanmusic project.