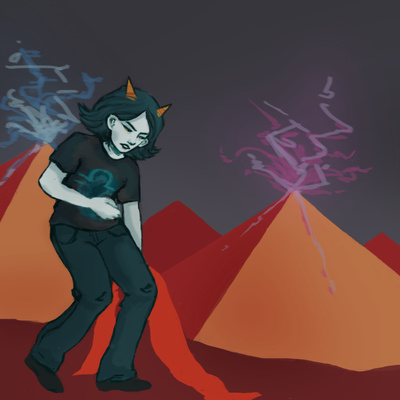 This is the song on LOFAM 4 that I'm most proud of, and was the most fun to make. Yes, it's Gold Pilot. Yes there are like seven other songs on LOFAM 4 that use Gold Pilot. But I do think I did a lot with it, and this piece showcases a bunch of different things. It starts with pretty standard Gold Pilot, and then slowly grows into the subversion that is the Gunshow 2 Theme, followed by a drop. Then there's a section inspired by Of Gods and Witches, then whatever the fuck happens at 1:42. Bring back the Gold Pilot with a new beat, and then end with Formation. Dumb weird fadeout that I definitely could've improved somehow but I was lazy. I wrote -Omega- Timeline with the Game Over timeline in mind—the dark feel and the choirs peppered throughout reflect the devastation to the A2 session, the Of Gods and Witches section is somewhat of a tribute to... dead kids? And the next section is a tribute to... uh, the happiness that's gone? I don't know, come up with some meaning there yourself. Most of this piece was me going for a specific feel rather than a specific meaning. Also, the dashes in the name are more for my own amusement than anything. -ω-

Omega Timeline is a song about the Game Over timeline, which Terezi heavily assists in healing with a plan she formed herself. Naturally, then, it works for the art to show Terezi in the middle of her final journey in this timeline, inches away from finding her true potential. It fits the adventurous and determined nature of the song pretty well! The fact that the letter Omega is associated with Libra helps too, of course.