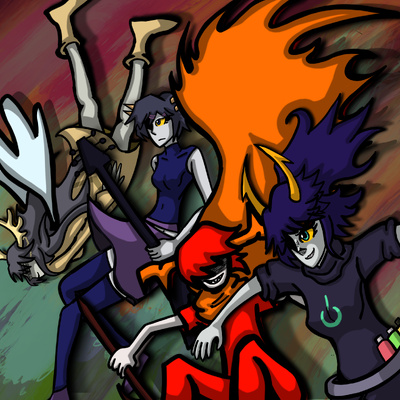 I was listening to STRIIFE right when it came out, then I thought, "Hey, this is fucking amazing" so I was inspired to make a Tensei-esque song. Its success is still unclear, but I like it. I hope you enjoy.

So. Let me just say right now that nights, the one who first thought up these fantrolls and drew them up for the Strife 2 album, is top tier at character design. These guys were all really fun to draw and I'm glad that they came out as well as they did, honestly. They're all very differentiable from other fantrolls and just look really nice. Read nights' comic, Oceanfalls, because it is good and has nice character design/art in it too.

The music was rocking and good so I went for a dramatic action shot. I used Jojo as a reference for this type of shot, because of course I did (Read Jojostuck). The background and everything about this picture is made only to look kind acool, which it sorta does. The art functions on the "rule of cool" so to speak, at least a little bit. There's not much to say about it, honestly. Maybe I've already rambled on more than other artista bout this, and I'm pretty much done expositing, but I'm gonna go just a little bit further with this commentary. But it won't be lal that important. Just recounting a story I remembered.

Did you ever hear the tragedy of Darth Plagueis The Wise? I thought not. It's a story the Jedi would tell you. It's a Sith legend.