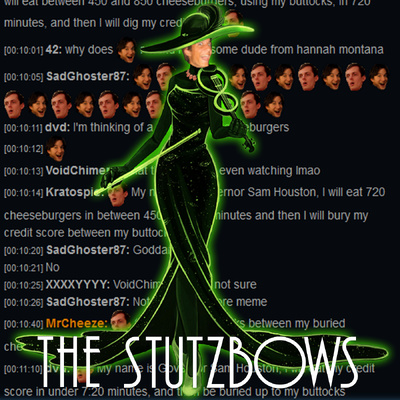 Tracks that Three in the Morning (Ngame's Bowmix) [Explicit] references:

For those not in the know, Michael Guy Bowman is one of the most iconic people associated with Homestuck. You may remember him as the composer of Sburban Jungle, one of the comic's most iconic songs, the angelic voice that captivated your ears in How Do I Live (Bunny Back in the Box Version), or maybe even as the "face of the fandom" for his famous Homestuck videos and convention appearances.

What isn't as well-known is that he's also an incredibly hilarious individual with dozens of sketch comedy videos - often featuring his equally sidesplitting friend, Scott Stutzsman - and I wanted to bring these two worlds together. With the release of Volume 10 in June, and the resulting focus on the Homestuck music team, Bowman appreciation had a resurgence in the fandom (especially one particular video, Bowman's Credit Score). I got caught up in the fervor as well, and made my first foray into music remixing to put together the first iteration of this tribute to Michael Bowman. The remix includes notable quotes or samples from every video that Michael Bowman and Scott Stutzman collaborated on, as well as many of their individual comedy videos.

If you liked Bowman's Homestuck stuff, love comedy videos, or were just too damn intrigued by this song to stay out of the loop, I recommend giving the Stutzbows (as I like to call their videos) a watch. Whether it's Scott singing you the jingle for his favorite breakfast cereal, Bowman informing you about his credit score (spoiler alert: it's 720), or both of them having some good, old-fashioned backyard fun, I'm certain there's something to enjoy for everyone.