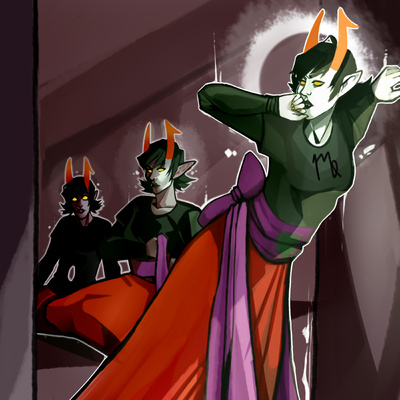 holy shiiiit it's uh that third track I made for the Homestuck music contest. wow. remember that? that was so long ago. anyway this was a track for Kanaya, at that part where she comes back as a rainbow drinker and slaughteres everyone. it's super great.

I redid this track from the ground up for lofam 4, updated the flute playing and everything. Is it better? Is it worse? who knows, really

This image has three Kanaya Maryams in it. Having two more Kanaya Maryams than Homestuck itself had is a bold creative decision, one which, in my opinion, works out rather well. I very much like the 'Naya in the foreground's halo, illuminating her face, while the Maryam furthest from the front of the scene is relatively shrouded in darkness. Consequently, her bright yellow eyes shine like a wild animal in the dead of night. Cool as hell all around, this image.