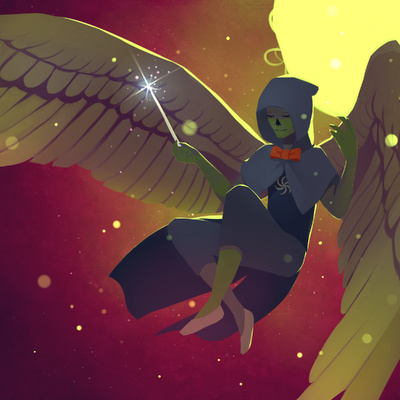 Originally, this piece was written for a good friend of mine, Patrick. He was running the fan adventure Loftlocked at the time, and I'd supplied the comic with a lot of music in conjunction with Kurtis (who is also on this album! Check him out!) Pat had approached me to write a haunting refrain for a harp playing character, Eliza. This theme would eventually form part of several songs written by Kurtis and myself, and the most prominent of which, Lamental, was made into another song, Infinity's Lament. It is a fun, jovial melody that turns darker as Eliza becomes less sure of herself and her playing. However, in a Homestuck specific context, consider Rose playing the rain, plucking strings but quickly finding herself at odds with her own land quest. Who knows? The beauty of music is that you can make your own interpretations.

This track was initially left open to interpretation but being in contact with Veri, I asked him for a recommendation for its subject. Apparently, while Glide was oriinally composed for a fan adventure, the main motif features in a large and yet-unreleased track concerning Alt!Calliope. Veri ultimately decided that I should draw Alt!Calliope, which I was happy to, seeing as Calliope is my favourite character in Homestuck and in dire need of more fanart.

We've only ever seen Alt!Calliope looking extremely grim in the comic so I thought it might be a nice change if I were to depict her in a more clement mood. Imagine her soaring through space, creating and destroying galaxies. I gave her wings just so that the illustration would remain relevant to the title of the piece.