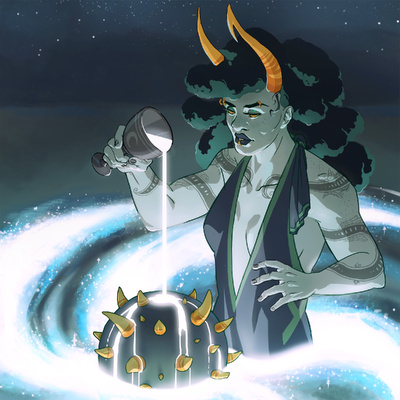 This piece was written for Porrim Maryam. The instrumentation is based off of her two themes, Jade Mother and Darling Dolorosa, which both feature piano and violin. The actual meaning of the song is open for interpretation because I went mostly off of feelings when writing it. Its name comes from the goddess of childbirth and prophecy, Antevorta, whose alternate name is Porrima. This song's alternative name in my own album is "Glass Heart."

This illustration stumped me. Porrim's character is more thematic than it is concrete, and such an open-ended premise left me chasing down a few false starts in the piece's design. The failure of Porrim's role as maid of space nonetheless contributed to events on a massive scale. Ignition does not mean success. Finally I found something I think captures it all without being too obvious.