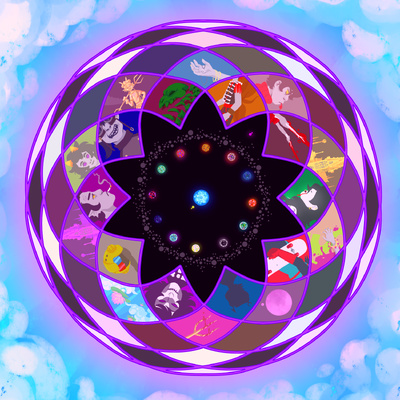 3 days before the finalization of my track marked one year since I took on to music production. I formed a soundcloud with a friend and we went from there. To this day I have no real definitive style (neither of us do really), but I wanted to work on Hardstyle to get my foot in the door. I wasn't all too successful, and I often don't ever finish projects. Once I saw news of the fan album, it gave me reason to create a track. This track was a twice failed and shelved project. It finally bloomed into what it is now. Really I just want to thank the Beforus team for having me here. THis endeavor really gave me hope and reason behind my production. This is my first major step into the realm of music production. Shout out to Xavier, you're like a brother to me.

For Skaia Ad Infinitum I wanted to include the classic spirograph defense portal symbol (in purple as opposed to the Alternia trolls' blue ones, for its symbolism) and Skaia itself, while also showing some tidbits of the Beforus trolls' session of Sgrub that we know about through the portal, since the track is about Skaia watching over the session. As the track art took on a center focused composition I also included the planets and moons of the session, and it also tied it back to Skaia again with it in the center.