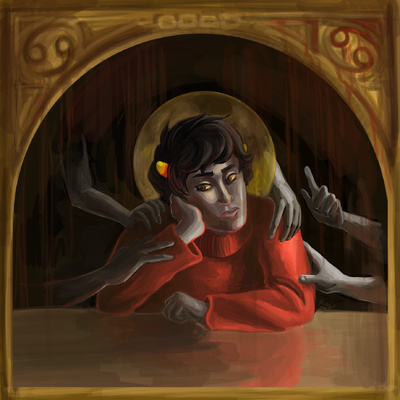 Civil Discussi9n was my first purposeful musical contribution to the album! I wanted to produce a track that captured the feeling of Kankri's self-assured snobbery and pseudo-intellectualism as it was presented in his first appearance in Openbound, but from his own perspective. I imagine the feel of the track is rather what Kankri thinks of himself in his crusade for social justice. The structure of the melody was inspired by certain works of baroque classical music, although I can hardly have been said to have stuck to any one particular convention! The track was originally intended to be modified somewhat, but due to technical issues I lost the progress file for it! Hoewver I didn't want to see what I had to waste, and I believe that the track stands up solidly on its own in its current form. I hope you think so too!

For this piece, I was thinking particularly about how the track is meant to be how Kankri views himself within the greater context of Beforan society. I thought that the classical Baroque influences in the music really reflected the rigid pseudo-benevolent social strucutre and pretensions within Beforan society that Kankri seeks to criticize and improve upon, albeit in his own flawed way. Visually, I drew influences from various religious artworks, including Medieval iconography as well as the Baroque paintings of Caravaggio, referencing both Kankri and the Sufferer's roles as a play on traditional literary Christ figures. Overall, Kankri takes himself extremely seriously, and the track art reflects that self-image in the form of a somber, messianic martyr heroically withstanding the persection of people triggering and encroaching upon his personal space.