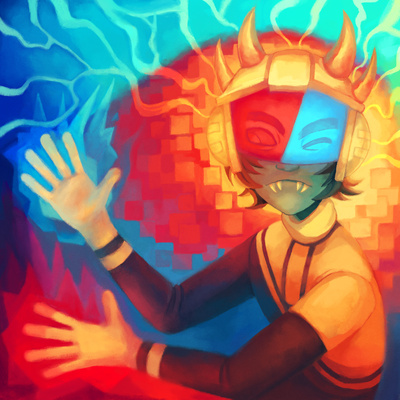 Tracks that reference ♊ - The Mituna Method:

I was asked to make a track as a theme for Mituna, so my first thoughts were 1. chip sounds and 2. guitars. The first draft of the track was a lot more chaotic, with the melodies being played on live guitars, and it didn't really work out, so most of it ended up being cut - only a couple of backing guitar tracks amde it onto the final piece. The title and theme of this track is based on a (somewhat infamous) fan theory, which speculates that Mituna's injuries come from him burning out whilst using his psiionic powers to propel Prospit's moon from the alpha trolls' session into another, allowing the remaining living trolls to use its quest beds to go god tier. I don't know if that idea will pan out at all, but I thought it was interesting enough to write a song about! I hope that you think so too!

for the track art i decided that i should depict mituna looking almost as if hes using his psiionics! in the design iwanted to use a pixelly pattern which i thought went along with the chiptune sound of the song, also i listened to the song on repeat while making it!! i apologize the whole picture itself is really eye strain-y but i thought it would fit!