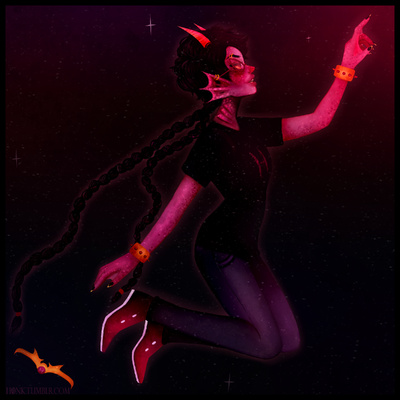 Pink Moon Escape is meant to describe Meenah's escape from her responsibilities, where she literally runs away from being queen and goes to the moon before the Beforus session starts. Overall, I tried to capture the feeling of flying through space and leaving everything stressful behind. As far as structure, the beginning part represents Meenah starting to feel better, but still holding back a bit on good feels. Then, after the drop represents when she finally lets go of everything that once troubled her. The song ends similar to how it started to sort of foreshadow her return to power in the end. Funny story: the song started out with a 4/4 time signature. When I made the drop, I was making it in 6/8 without really realizing it, and then after I figured it out, I rewrote the beginning part to fit the new signature, and it felt so much smoother and better. And that's how I found out about time signatures :P

I've actually never drawn Meenah before and at first I was a little nervous but as soon as I heard the song I got very inspired and came up with a bunch of concept sketches. I decided to go with this image because I think it stayed true to that feeling the song gives you of being free and letting go. Hope you enjoy!