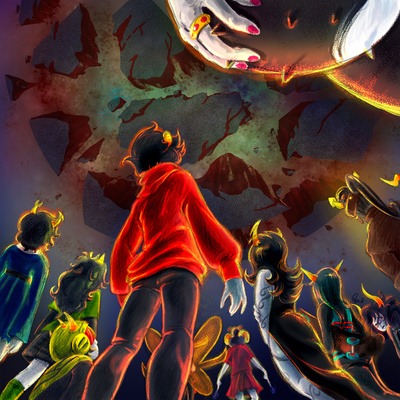 ARANEA: You look into the future and see a life lasting for may8e thousands of sweeps, with nothing to look forward to,"

A lament of waiting - for the Beforan trolls, it was not a violent end like Game Over, but a longer, hopeless failure to reach conclusion, with a game that they could not win, but that also would not kill them (until Meenah blew them up). The piano runs throughout, frequently chiming the passage of time, sometimes becoming more elaborate as strings take up the melody. Near the end, a solo cello plays af inal dolorous utterance of the melody before evanescing into the void.

Choosing what to depict in this image was a struggle. The song itself brings such a sense of grim finality! Ultimately, I ran with the moment that kickstarted the Beforan's even longer wait; the remains of the destroyed battlefield hangi n the sky as the defeated trolls await their impending doom.

This song is rogeous! The unexpected harmonies and chord changes grab your attention and keep you listening until the very end. It was a lot of fun to be able to record the cello solo for this song. The simple melody of the solo, along with the harmonies of the piano and other strings is really quite moving. It is a great pleasure to be a part of this song and album!