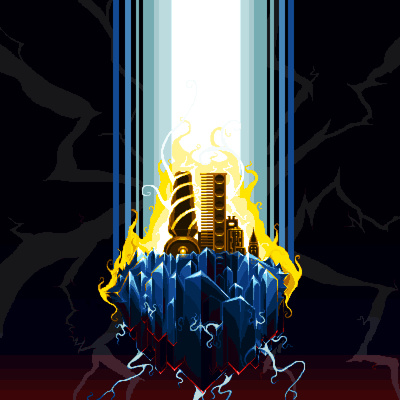 The Scratch Before The Calm

This song is divided in 3 parts: everything is sad and not going well - They enter the palace for the Scratch and it's mysterious - The Scratch begins and it's intense. For the sad part, it's just sad chords. For the mysterious parts, I used a lot of mysterious arpeggios and delay effects. For the Scratch, I used a lot of bitcrush, dramatic arpeggios, and I reused chords from the sad part and arpeggios from the mysterious parts because the Scratch is mixing things. I was inspired by the music of Steven Universe for the style of mysterious arpeggios. I think the music of the series did a great job with how they represent dangerous mystical stuff. I created all the sounds with NI Massive, used Replika for delay and Decimort for bitcrush. I had a lot of fun doing these songs and I hope that you liked it!

I was really happy wit hthis song from when I first put on this song and heard the slow, ominous opening. I think it really captures the sense of dread and mystery that surrounds the Scratch. Though the song has a three-part structure, visually I wanted to focus on the event itself. We only briefly see this in the comic, and it's a very striking scene. It was a lot of fun to draw the gigantic music box at the center of everything, and the various lighting effects were an interesting challenge.