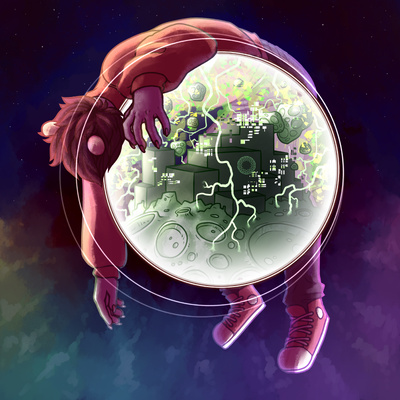 This song was inspired by the glitch in the Beforan trolls' session, the event that caused most, if not all, the conflict in Homestuck (some by great extension). I've made music before relating to a similar topic (Void Session), but that was more relevant to the alpha kids. The functions and mechanics of Sburb has always been one of the most facinating aspects of the Homestuck universe to me, so it's always fun to explore that inspiration.

The challenge here was to depict the glitch in the session itself, which is a pretty vague concept; the alpha trolls' ectobiology took place after the scratch, they weren't born in their own session. This is also Lord English's calling card, which is represented by the orb kinda looking like Scratch's head depicting the ectobiology lab in universe A2. I originally wanted to include all the trolls in the piece, but it was way too cluttered so I just went with their colors instead. I didn't want the whole thing to be about Kankri since this is about a game concept in general, but the reason I used him was becuase to my (questionable) knowledge, he probably would've been the ectobiologist if their session wasn't glitched, like Karkat. This was definitely a challenge but I'm honored to illustrate for such an incredible track!