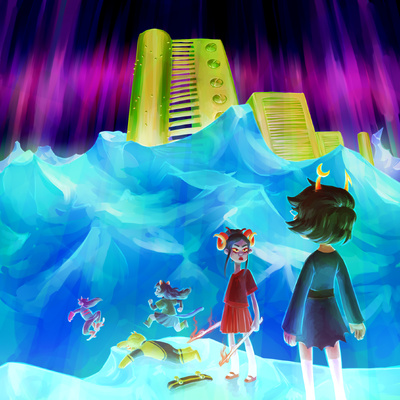 Tracks that reference For Beforus:

The Beforans' session on Skaia was doomed before it began. Beforus looms in front of us as we slowly zoom in on the planet itself, when, at the critical moment, we cut to Meenah and the gang. As they desperately avoid getting killed in the Cataclysm, their path to the Medium is laid bare. Once there, they go through their trials, from locating their denizens, to frog breeding, and to the required ectoplasmic shenanigans.

But when it becomes clear that their sesison is bound for a Scratch, Meenah is forced to make a terrible decision.

For Beforus was about the doomed nature of the session and I wanted to show it with a picture of the instrument for scratching the session, the big music box in the Land of Quartz and Melody, and the Quills of Echidna, the means of creating the scratch. The track starts out very positively, and I wanted to includ ethat hopefulness by adding more characters in the picture that as of yet don't feel the threat of the failing session looming over them.